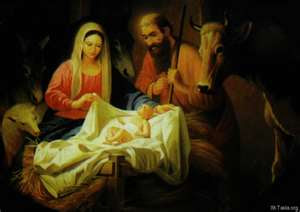 Merry Christmas to all.

Posted by doubletrouble at 23:23 4 comments:

Last Christmas, my son gifted me with a Sig P238. I love the piece, but never liked the plastic grip panels with which it was issued. I thought the coolest thing for a mini-1911 would be wood double-diamond grips like the big guy. The closest thing I could find were Sig factory grips, but they were emblazoned with the Sig logo- no go.

Back in October, Og had a post about Altamont Corp., a manufacturer (USA!) of handles for things. I checked out their price list, & found that their products were more reasonably priced than the competition. I dithered.

I happened to show the link to the Mrs., & she sprang into action. Since yesterday was the anniversary of my annual orbit, Mrs. DT saw fit to purchase new grips for my P238: 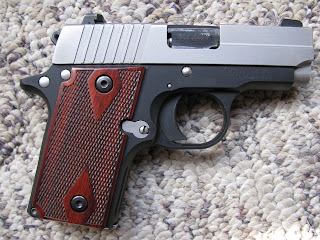 Very nicely made, as thin as the originals, & more grippy to boot.
Good goin' Homey, & thanks for the tip Og.

I'm gonna be flashin' my gat all over just to show off...
Posted by doubletrouble at 12:45 3 comments:

Mrs. DT & I went out to see a band last Friday night. We’re not big clubbers (anymore), but this band was of special interest- the leader of said band was also the lead guitarist in a legendary band from the sixties, “The Downtrodden Masses” (hey, stop laughing, it was the sixties!)

What made this band so legendary was the fact that I was the rhythm guitarist; that’s right rock fans, your humble host was a participant in the band that led the way in music development of the era.

What, you never heard of us? Well, maybe the memories are a bit distorted. Or maybe I lie like a rug. Whatever. 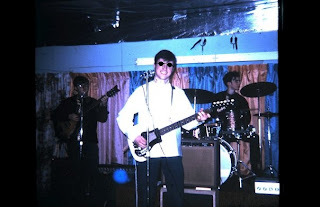 Tomorrow I'll complete another turn around the Sun, & those days seem a tad distant now.

need to be cleaned before the temperature gets below freezing.

Otherwise, you get to be a moron whilst breaking ice-encrusted gook & leaves from your eaves.

Posted by doubletrouble at 18:10 2 comments: