My kid makes fun of me when I tell him I got hawn worms on my tomatoes (“it’s not hawn, it’s hoRRn”). 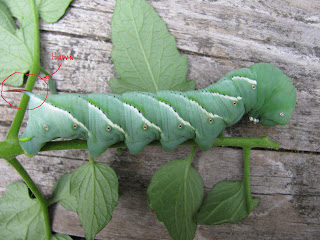 Is that not one of the ugliest creations under the sun? That beast is just under 4” long, & was doing a number on my plants. They’re tough to see in the foliage, & usually go undetected until the damage becomes evident. We picked 7 of the buggers off, & now will have to go into "high inspection" mode to keep them gone. Crap, haven't had any in about three years either...

Dude. Is that a PHOTO? It looks like a CGI monster from Star Wars - Jabba's younger, smaller, more repulsive brother.

Ayuh, that's a pic Lissa, taken next to the garden. We picked a few more this am.

I've found that if it is reasonably quiet outside, you can actually hear them eating; I've found several just by listening.
When I was in my teens my dad had some greenhead mallards in the back yard; those birds used to go after tomato worms and gobble them down like a dog with bacon. The ducks would walk through the garden wreaking havoc on hornworms, slugs, and grasshoppers. I imagine chickens would probably do the same.

Wicked ugly. I know that chickens do do a numbah on a lot of bugs. I like the duck angle, though the duck poop might be a bit much. Mebbe you can rent one out for a few days of 9-5 garden duty?
My neighbor had a Peking duck named Mrs. Ping that would have been right on for the job. Sadly, she went for brunch back around Eastertime.

appears to be a tobacco horn worm, maybe you can bribe them with smokes...